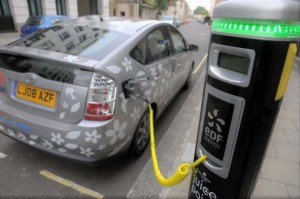 The global crisis management gurus are of the opinion that, an alternate to gasoline is of utmost importance. Electric charging stations for cars could be a topic for finding solutions in the future. The action plan to influence the Climate change worldwide would require certainty on new and innovative technologies.

Innovation of Electric cars would be one of the major steps towards controlling pollution worldwide.  Green house effect is arguably one of the biggest concerns for the governments around the world. Pollution control is one of the top agendas for almost all the countries, especially the developed and developing countries. Transportation sector is the second largest sector in the United States, which accounted to about 27% of total U.S. greenhouse gas emission in 2013, says a report.

The increased demand for various means of transport is the contributing factor for growing concern of green house emission around the world. Growing population, economic growth, urbanization, and affordable fuel prices are the factors that are driving the rapid growth of transportation sector.

Electric car and electric charging stations could revolutionize the transportation sector in the future. The possible threat to the environment could also be curbed with the adoption of electric cars. With the use of clean electricity in the charging stations, there is a ray of hope to minimize the GHG emission by a huge percentage.

To a sustainable future:

Alternate energy sources and alternate technologies to the prevailing ones will largely contribute in building a sustainable future for our ecosystem. Growing population will have demands that need to be met with a new outlook. The growing economies also have pressing needs in various sectors that directly contribute to the global concerns. However, breakthrough in technology could the only solution for both meeting the demands of the people and also protecting the natural environment.

Electric car as a concept is still in its nascent stage. Wider adoption of electrical cars in developed and developing economies will contribute in controlling pollution and eventually controlling the GHG emission.

There will be direct influence on the cost, as electric charging stations for cars can charge the cars at much cheaper cost than any other method of refuelling. There will be substantial savings with the use of EV’s over the life span of a vehicle.

It is known fact that electric based cars have the lowest maintenance ever. There is no need for regular oil changes and other mundane maintenance activities.  It is also very convenient to charge the vehicle right from home or charging stations. Home based charging would save a lot of time, allowing you to focus on better things.

Better technologies lead to better living. Innovation and breakthroughs in technology will lead to a sustainable future for the generations to come. Electric cars may not be the answer; however, will be one of the powerful factors in changing the tomorrow for better.